Apologies for a long post, but I thought I’d throw some of my favorite images from 2011 out there along with the lessons they came with. I hope you’ll find it worth your time!
————————————————————————————————————
I’ve tried not to make this blog too much about my own photography, but I took some time today to reflect on my journey this year and how far I’ve come. I got my D90 around Christmas last year, and shortly after that I read the two books that really opened the door to the world of photography for me. I don’t think I can overstate the impact Scott Kelby’s Digital Photography books and Bryan Peterson’s Understanding Exposure had on my ability to understand what my camera was capable of and how I could get out of the “Auto” and scene modes and really take control of what I was doing. It has been really satisfying, and a source of great fun for me in a year when a lot of things weren’t so fun. I doubt they’ll ever see this, but I’m extremely grateful to both of them.

I was finally brave enough to try out a Photoshop tip in Scott’s first book on my favorite photos of 2011, and I was really pleased with the results, so I’ve posted them all here. I’ve added a few comments about each photo, what it meant and what it taught me. I hope they’ll be of some use to you, or at least that you enjoy the image! (The WordPress photo hosting leaves a little to be desired, so clicking on each will link you to the Flickr page.). On to the photographs!
———————————————————————————————————— 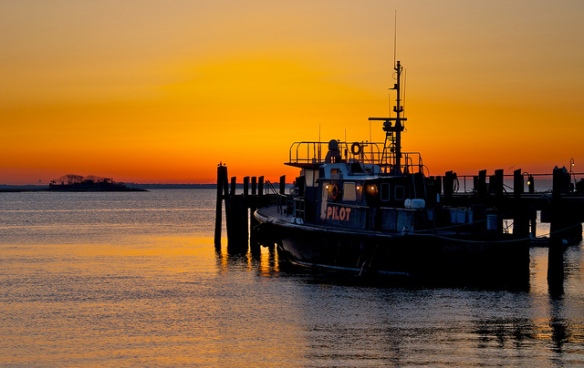 This photo was one of a set I took not long after finishing Scott’s books and really having some time to digest them. My mother-in-law lives in Charleston, and I got out before dawn one morning while we were visiting. I had no idea what I was going to shoot or really where I was going, but this boat was one of the first things I shot. It showed me how valuable my tripod really was to getting a shot like this! I was determined to shoot manual, and I must have taken forty photos, with varying shutter speeds and aperture settings. I hadn’t read “Understanding Exposure” yet, but when I did, I was thinking about getting this photo the whole time.
———————————————————————————————————— 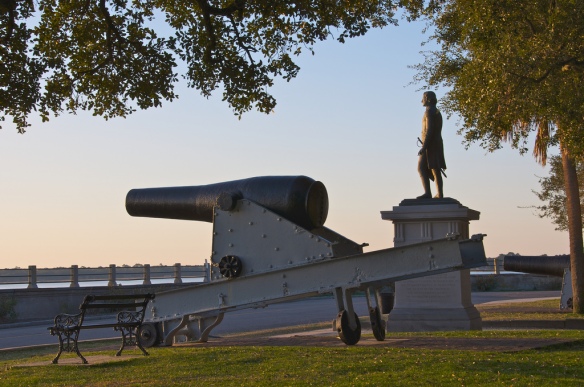 Something about this statue and canon eternally facing out to the harbor struck me, and I had to take a picture. What I remember most about taking this photo was that I kept the tripod legs folded – the composition standing up lost the searching feeling this image has, and brought the trees into play. It was an early lesson in thinking about up/down dimensions when composing.
———————————————————————————————————— 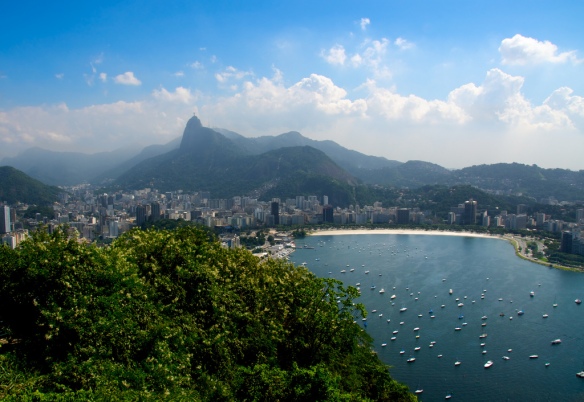 I’ve been so lucky to have been a lot of places in the world (mainly on business), but Rio was my first big trip after rediscovering photography. Not a bad place to go! I actually struggled a great deal. Knowing I wasn’t likely to ever return to this iconic place and with tough, hazy conditions, I was a little stressed out about getting the shot. Coming home, I wasn’t immediately happy with many of my photos, but these photos helped show me the value of shooting RAW and learning my editing tools. This image has come a long way from the first time I saw it out of the camera, and I’ll treasure it for my whole life.
———————————————————————————————————— 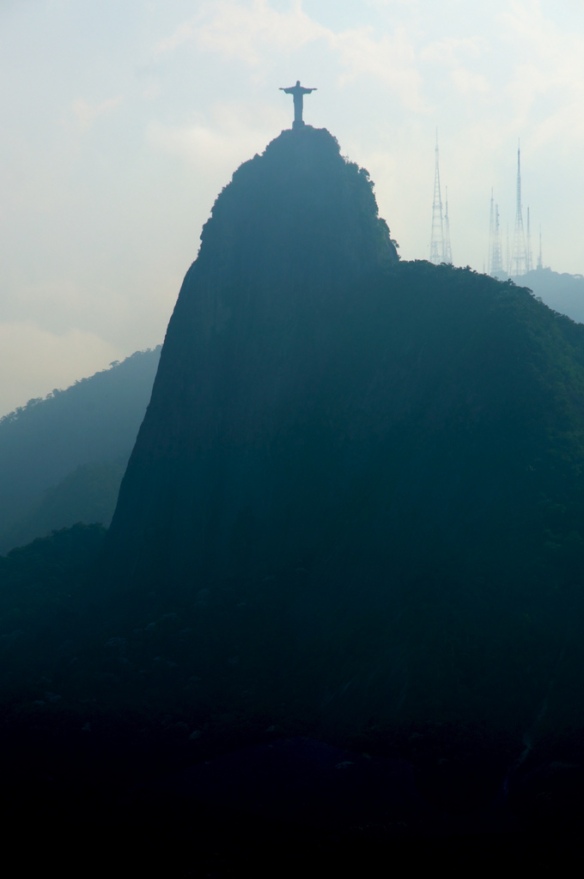 This photo probably gives you some insight to how difficult the conditions were. It was very hazy and bright. What I finally learned here was that I needed to relax, enjoy the moment and recognize than an Enthusiast Photographer is shooting for fun, not a paycheck. This isn’t a magazine-quality picture, but it means a lot to me. I wasn’t exactly feeling it photography-wise, and I was a little flustered, and I decided that was OK. Things went much better from that moment on!
———————————————————————————————————— 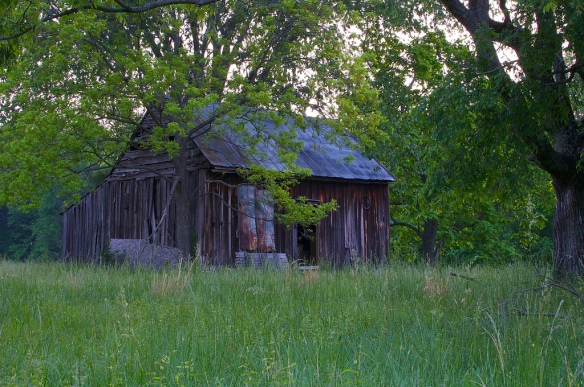 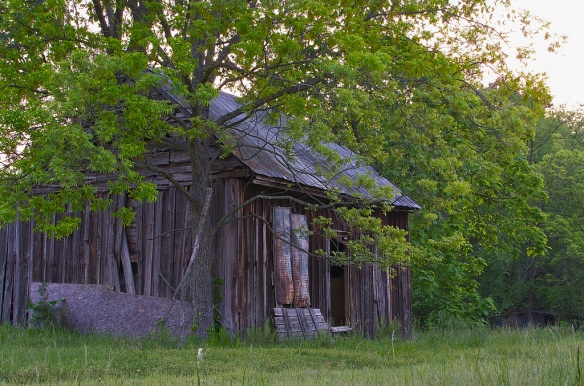 I liked this view of the shed since it seems like the tree is almost part of the structure, or maybe vice versa 🙂

I’d been driving by this old shed for years, and it suddenly occurred to me it has all the texture and color I look for when I want to take photos. I got out to shoot early one morning to a very disappointing dawn sky, which forced me to change what I’d expected to do that morning. The lesson here is you can’t always predict the weather or conditions, so you have to go with the flow. Instead of a blazing orange sky I have long, wispy green grass, which I think is a great counterpoint to the building.

A couple other notes here. First, this shed isn’t in a remote area – there are lots of developed neighborhoods all around it, and I’m standing in the shoulder of a fairly large road to take the shots. Sometimes you create an illusion with composition, and that is a lot of fun. I composed them to take the newer house off to the right out of the frame and ensured the power lines and other modern elements can’t be seen. Also, this building was boarded up and sealed not long after I took these photos, so it was a very good reminder not to dawdle when you get some inspiration – the chance might not be there tomorrow…
———————————————————————————————————— 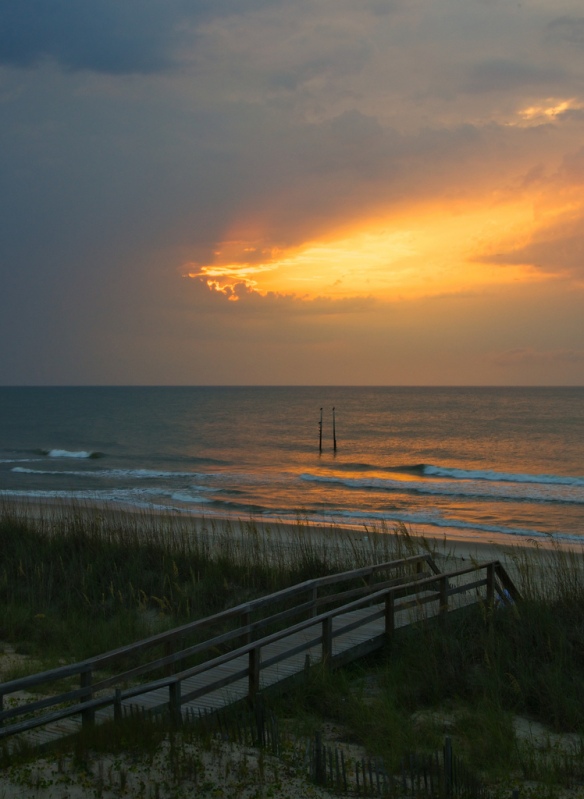 I spent every morning of our week at the beach watching the sunrise from the porch with my 9-year-old son. The composition was limited to the porch where I was drinking coffee and talking with him. When I posted these on various forums, I inevitably got comments about the two old posts from the pier that was taken by a hurricane years ago. The suggestions were that the posts are distracting and that I should Photoshop them out. But sometimes photographs serve just to remind you of a special time or place. Those posts are like an old scar on the face of a wizened man, and I’m not taking them out. They remind me of those conversations with my son and the nice old house we stay in every year. In other words, sometimes you just have to listen to yourself. 🙂
———————————————————————————————————— 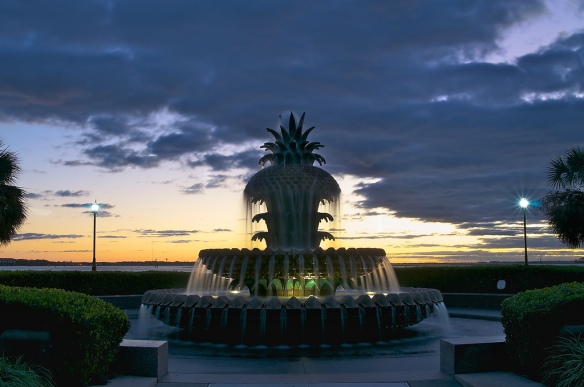 This was one of the images that benefited a great deal from Scott Kelby’s instructions on using the Unsharp Mask tool with Lab Color and the Lightness Channel in Photoshop. Now if it sounds like I know what I’m talking about, don’t be fooled. I’m just parroting what I read in Scott’s book, and true to form, he doesn’t bog you down with a lot of jargon and details, he just tells you how to do it. It was easy and the results are good. Sometimes the “why” can come later, and that isn’t a bad thing.
———————————————————————————————————— 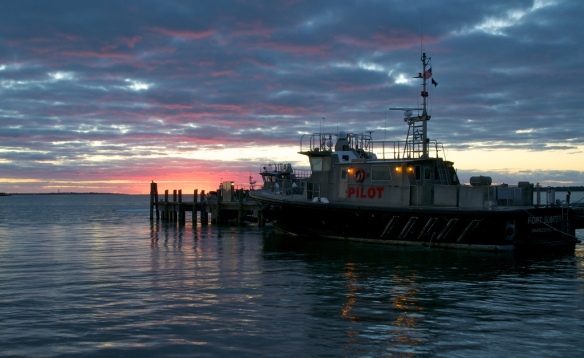 The outing during my November visit to Charleston was a bit of a bust. I was so busy getting out to shoot at dawn that I didn’t have a clear idea of what I was shooting or where I was going. The result was I wound up back where I’d been before. The good news is I got a shot that is a nice example of exposure. My first visit with the boat had much better color, but this time I was more aware of getting the exposure right, and the result is a better and sharper image. The wisdom gained from that day was to have a particular goal in mind every time you go out: shoot for color or texture, unusual shadows, whatever. 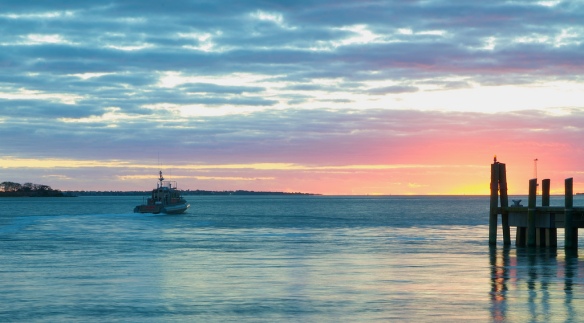 This is another image that saw great improvement from the “Unsharp Mask” technique, but also a reminder about being ready and aware. I was taking shot after shot of the pilot boat that I completely missed the sounds of this other boat pulling away from the same dock and heading for the rising sun. The focus was pretty soft, but the benefits of the full RAW information and Scott’s Photoshop tip helped recover most of an image I really wanted to capture but wasn’t quite ready for…
———————————————————————————————————— 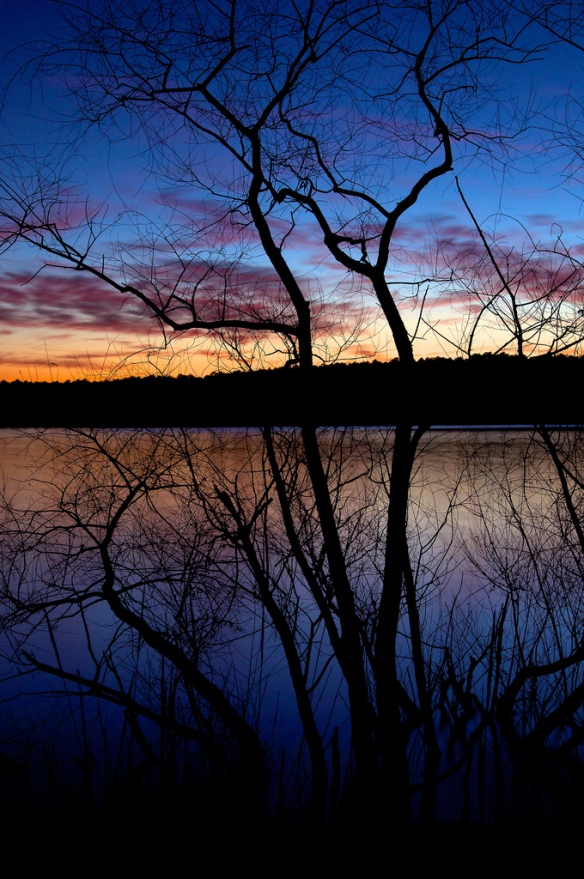 This was the last frame of my last shoot of 2011, and it is already one of my favorite photos ever. There were several lessons on that shoot, a few of them detailed in my previous post “Deep in the Woods” (net: carry a flashlight and think about darkness when you’re off the beaten path), but there were a couple more lessons I took away from that day.

In my haste to get back to my car before it got really dark, I noticed as I was driving out of the park that the light was still getting better and better. I wavered, but finally pulled over and went looking for a clear place to shoot over the water at the marvelous colors in front of me. The moral here is don’t be afraid to stop and grab a few quick shots. Anyway, as I hurriedly fought my way through the brush and brambles again, the scene above just struck me. I immediately stopped, set up my tripod and started shooting. The branches set against the sky were just so visually interesting that I couldn’t pass them up.

It cost me the opportunity to get the clear shot across the lake, but I’m positive that that shot wouldn’t be nearly as compelling (at least to me) as what I did get, and it reminded me that I have to keep my eyes open even when I’m on the way to the shot I think I want. The unexpected can be more powerful, and while the colors of the photograph I missed would have been really nice, the image itself would have been a little pedestrian. What I got was a lot more fun, and I knew it as soon as I saw it!

I’ll also mention that my new tripod and especially the L-bracket came in very handy here. My spot was on a very uneven set of ground, and I don’t think hanging the camera over in the drop notches of a standard ball head would have been much help to sharpness during the long exposure. The RRS BH-40 and the L-bracket were heroes for this shot!
————————————————————————————————————
I hope these have been useful and enjoyable! Among other things, I’m busy writing up my 2012 Photography Goals and Resolutions. I’ll publish mine soon – what are yours? What were the big lessons of 2011 for you?

Thanks for reading, and please let me know if you have any topics or questions I could use for a blog!