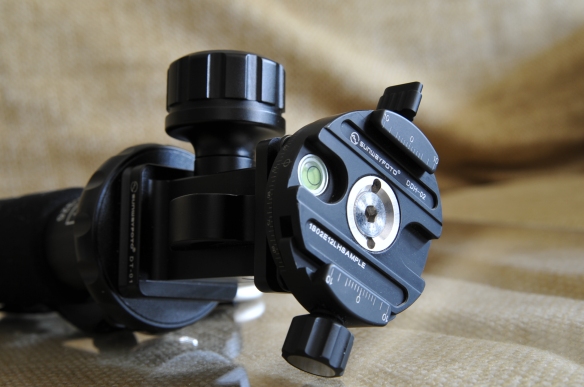 Quick Report for the impatient:  Pro-grade quality and handling in a very compact package at a very competitive price.  The unique design of the DDH-02 won me over in a hurry.  Almost any monopod shooter will appreciate the usability, quality and value of the DT-01 monopod head, while pano shooters or folks with larger lenses will love the small size but great shooting flexibility and handling offered by the DDH-02.  These two products turned my monopod from something I was dreading to use into an essential element of my kit, enabling some of my favorite shots from my recent trips to Asia and Europe.  Highly recommended.

If you read my preview, you know my latest gadget is a monopod.  I got it knowing I’d be spending two weeks in Europe in a bunch of very old, very dark buildings, and I really wanted to be able to take photographs without using a flash.  Even if I wasn’t of the opinion that flashes ruin the experience for everyone in these kinds of places, flash is generally frowned upon and most often isn’t allowed at all.  I’m usually an available-light guy anyway.  Unfortunately, tripods are also generally not allowed, either.  Monopods, on the other hand, seem to be acceptable in lots of places, either by policy, indifference or indecision.  The only exceptions to this in my travels were the roof of the Mori building in Tokyo and Versailles in France.  Neither made much sense since I saw lots of folks with canes, walking sticks and other things directly similar to my monopod, but whatever.

When I tried a monopod for the first time, bolting the camera directly to the top of the monopod immediately raised the “fiddly flag” – I had to tilt the whole thing to adjust my field of view, and it was clear right away that this setup wasn’t going to work for me.  I knew I’d be seeing a lot of domed churches and shooting with very wide lenses.  I’m not enough of a contortionist to make that happen with a monopod alone, plus the stability benefit deteriorates quickly as the angles get extreme. The L-bracket on my camera and the foot on my long lens have threaded holes for mounting to a tripod or monopod, but on top of the angle and handling limitations, who wants to deal with screwing and un-screwing them all the time??  I figured my Arca-Swiss plates would give me the same benefit here they do on my tripod – easy and quick mount/un-mount.  Of course I knew about the RRS MH-01 head, but for something I thought would see only occasional use, it seemed like a significant investment.  I’d seen similar, less expensive offerings at CES, including one from Sunwayfoto – the DT-01, so I began investigating.

I had more problems than I knew.  One of my favorite lenses is my vintage Nikon 80-200 f/2.8.  It is a big, heavy lens, and I love using it on my tripod.  I have an RRS plate that allows me to attach it directly to my Sunwayfoto XB-44 head.  Something I’ve never thought much about is the direction the plate faces when I use it…

…until I started looking at the monopod heads.  As opposed to a ball head, a monopod head swivels on a single axis.  This gives you the ability to easily change the angle of the camera relative to the monopod leg (either up/down or a sideways angle), and lock it in for full monopod stability with much greater flexibility.  Adding an Arca-Swiss plate to the mix means you can attach/detach very quickly, but it also means one other thing: you have to pick which direction the mount faces.  This isn’t a problem unless you’re using a lens with a foot, because the plates for the foot run at a perpendicular angle to the plates for the body.  That means if you want the same kind of angle adjustment (usually up/down) for body and lens, you really have only three options.

The first two options just weren’t going to work for me.  Then Winnie from Sunwayfoto suggested I look at their new DDH-02 panning clamp.  I’d seen it on their site, but was worried it was too small.  I really thought the larger and more robust DDH-01 was a better choice.  Winnie surprised me by offering to send three options to me for review: the standard clamp (the DT-01 can be purchased with no clamp or a standard screw-type 50mm head), the DDH01 I (thought I) wanted and the DDH-02.  You can read my initial thoughts on all three and see lots of photos in my preview review – let’s get to the review of what I actually took around the world with me – the DT-01 with the DDH-02 on top.

The DT-01 is a pretty simple product.  A large, all-metal knob with moderate knurling (bumps :)) for grip.  A single beefy swivel rail that allows for 180 degrees of angle. (the RRS and Sirui heads have two rails, which seems more complicated and more likely to get bent to me, but is likely just a design choice).  There are degree markings on the head with major and minor notches, but there are no numeric values, which didn’t bother me at all.  The DT-01 is dovetailed at the base and top mount for compatibility with Arca-Swiss clamps.  This is useful when using the DT-01 in some fairly exotic head setups, but mainly is a big weight-saver for most of us.  There is a DT-02 that is essentially the same head with a panning base, which is great for very large lenses, but too much bulk for me.

The DDH-02 is a unique product in the market today.  The best thing about it is that it is extremely small and light.  As I was hauling around a lot of gear through Beijing, Tokyo, Kamakura and lots of Europe, any reduction in carry-weight was a welcome thing.  It has index marks from 0° to 90° and back around the full circumference of the head.  There is a bubble level integrated into the base plate.  The clamp is a screw-type clamp and the clamp rails themselves are marked on each side with the center and offset markings up to 10mm on each side of center.  The screw-knob is all metal and has deep knurling to ensure easy grip.  The panning function is secured with a metal flip-clamp: turn it left to unlock the very-smooth panning.  Flip it a bit more than 180° to the right to lock the panning motion.  This means you have a very positive “down” push to secure head, and the hold is extremely tight.  Every aspect of the DDH-02 points to thoughtful and original design on the part of Sunwayfoto.

Smooth, simple and solid come to mind for both products.  Full lock to fully unlocked is about a half-turn on the large knob of the DT-01.  There is no slop in the DT-01 – even when the knob is fully open the head won’t fall under it’s own weight.  The DDH-02 is designed very well.  Since the knobs are generally going to be hidden under the camera while you’re using the clamp, the round knob of the clamp vs. the tear-drop shape of the panning knob are very intuitive.  Switching from the body plate to the big lens and back was almost invisible – it was fast and easy.  Flip the panning knob open, rotate, flip the panning knob to lock, done.

I guess the only thing I can find to criticize at all in either product is I wish the knurling on the knob of the DT-01 was slightly deeper. It is almost exactly the same size as the knob on my XB-44, but the channels are a bit shallower and it lacks the textured surfaces.  This is picking nits, since not once in any of the sweaty old buildings did I slip while handling the DT-01, but I do think it would be a useful improvement.

I was a little worried that the clamp rails on the DDH-02 weren’t beefy enough to securely and stably hold my body with the large 80-200 lens.  This proved to be unfounded – the whole platform is very solid.  If I was using huge lenses, I’d go with the bigger model with the built-in panning base and/or the beefier DDH-01.  But for a 300mm prime, the 70-200 pro zooms or anything smaller, the DDH-02 is easily up to the task.

In combination, these two products carry very well due to their light weight, and handle seamlessly.  They also make very efficient use of space without big knobs sticking out – another big plus in my crowded bag.

What can I say?  Both products are built entirely out of aircraft-grade aluminum, mostly anodized and clear laser engraving for use shooting panoramas.  Movement is smooth, easy and positive, with a nice bit of resistance and no slop.  No plastic anywhere.  Just like my XB-44, I don’t sense any corner-cutting here.  Quality is excellent.

The DT-01 sells for $112 at B&H and Amazon, while the DDH-02 lists for $99. That puts you about $100 less than the comparable RRS panning setup with less weight and arguably better handling.  I handled the DT-01 and the Sirui L-10X head within minutes of each other at CES and came away with “Pro” impressions of Sunwayfoto and “Consumer” impressions of Sirui.  Comparing the models that come with the standard screw clamp, the Sirui comes in about $47 cheaper, but isn’t all-metal, has some exposed bolts and generally just seems more of a consumer-grade RRS knockoff.  That isn’t to say it isn’t a decent product, especially for the occasional users. Of course, Sirui has nothing like the DDH-02, and that is the piece that sells the whole setup for me.  For this Enthusiast Photographer, that makes the choice pretty easy – I like pro-grade at an affordable price.  I noticed several ball heads were now offered bundled with the DDH-02.

I’ve been very impressed with the products I’ve seen from Sunwayfoto.  They are clearly shooting for RRS quality at a lower price.  They handle well and it is clear they aren’t doing knock-offs – they are designing with real-world use in mind and offering some great features.  I really appreciate that I was offered the opportunity to look at the DDH-01 as well.  It is clearly a product that is better suited to use with some of the more exotic head/gimbal setups as well as traditional ball heads for panoramas.  I may do a separate review on it at some point, or loan it to a buddy who does lots of pano-shooting and get some thoughts from him.

If you have a monopod and don’t have a setup like this, I think you’ll be delighted with how much easier it is to shoot with your monopod.  If you’re getting a monopod, I’d highly recommend the DT-01.  Folks who have adopted the Arca-swiss system who have long lenses with feet will love how easy the DDH-2 makes switching between body and lens-mounted plates.

Thoughtful engineering at a competitive price is a winning combination for me, and I’m looking forward to many years of use from the DT-01 and the DDH-02.